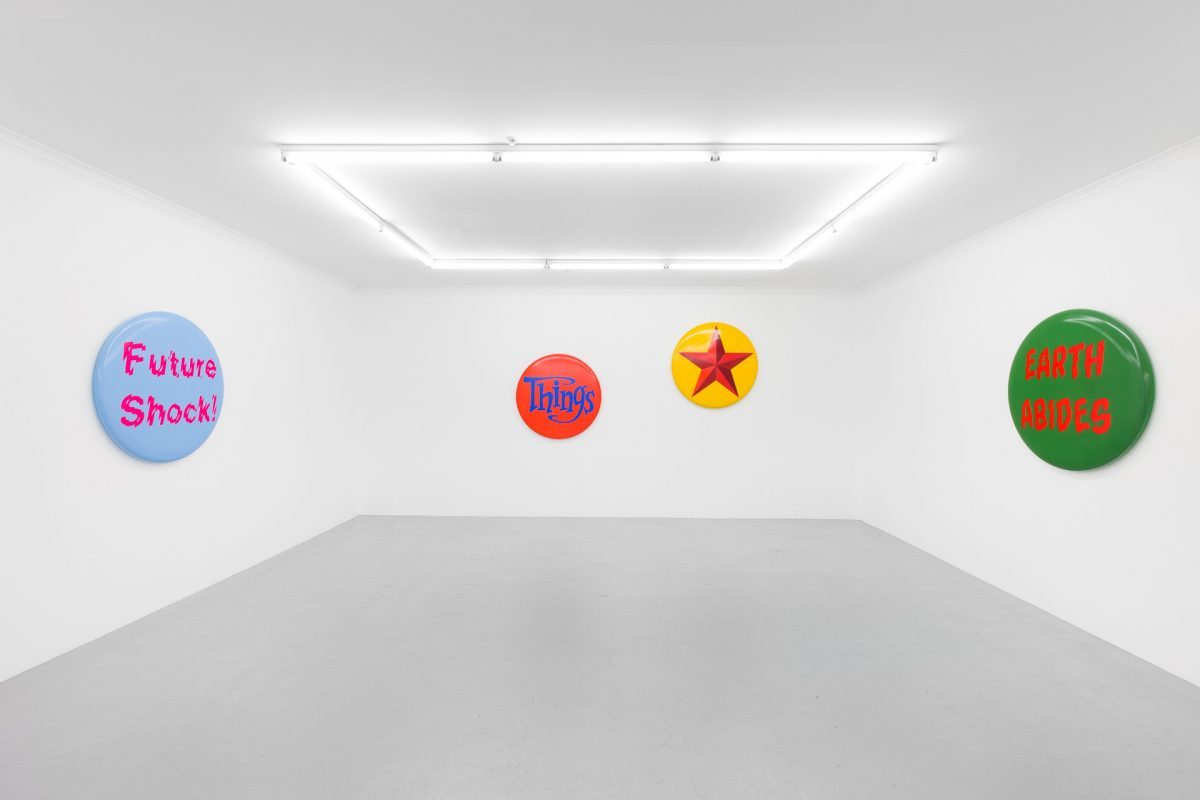 Badge, marker, insignia, token – synonyms with an etymology circling strategy, authority and uniform. A signal!  A flag! A logo! A talisman! “Are you with us?” it asks. A badge is to a jacket what a neon sign is to the night: a micro-sized statement, a small idea with a luminescent voice. Sometimes it has been pinned there for years, this medallion of DIY activism. “I am,” the badge boasts, the prelude to a knowing nod. Unlike a stamp, a badge does not centre itself on the act of creation, only the message it glorifies – even with that pleasing staccato and analogue satisfaction of a button-press machine.

“KA-CHUNK!” While the physical badge has faded out of vogue, it is as prevalent as ever via the little circular avatars we pin to our outwards-facing profiles. Some are political, others cultural, aspirational, humorous or fictional, they exist for the same purpose: to show others who we are or what we’re standing behind.

Adam Norton’s ‘Giant Badges’ are signs of the times. Are they political? Nostalgic? A futurist’s guessing game? A counterculture black mirror? A wry wink at consumerism? ‘WIN!’ ‘YIPPEE!’ ‘THINGS!’ These high-shine, candy-coloured discs elicit the era of the neon renaissance, when superheroes wowed nuclear families in full-colour vision. POW! WHAM! POP! Good vs evil was made to seem uncomplicated, and political stances or cultural cliques became flair on a lapel, politicising fashion with a metal spike. With 2020 vision, Norton’s badges, emblazoned with retro-future ideas, simmer and blur with current affairs, science fiction, fact and pop culture. As if having travelled through time, Norton’s large-scale, low-tech iconography is an esoteric punch of future concepts from the past, made for the now.

Since “alternative facts” shouted its way into our lexicon, thousands have sought answers in books like ‘1984’ by George Orwell, Aldous Huxley’s ‘Brave New World’, and ‘The Man in the High Castle’ by Philip K. Dick, landing them on 21

-century bestseller lists.  The words of these futurist authors were spoken in 140-character spurts. “The Party told you to reject the evidence of your eyes and ears,” Orwell’s words were spat, screenshotted and shared as if they were news headlines. Norton, an apocalyptical sci-fi devourer, hints at these parallels with zeal.

There are winks in ‘Future Shock!’, a phrase coined by author Alvin Toffler in 1970 from a book of the same name. It signifies a distressing psychological state pertaining to “too much change in too short a period.” We see ‘EARTH ABIDES!’ scrawled in red over green, as if lifted from a B-grade horror movie poster. It is the title of a 1949 American post-apocalyptic text about a plague that destroys most of the world’s population. As civilization falls, primitive tools and culture prevail, “Men go and come, but Earth abides,” reads the title page.

Today, a commercial rocket shoots to the stars half a decade after the Apollo 11 Mission, while the sounds of Gil Scott-Heron’s ‘Whitey On The Moon’ rings out into the street as it did back then. ‘Soylent’ may nod to the dark 1973 film ‘Soylent Green’, with underlying themes of the danger of overpopulation and climate change. But through a 2020 lens it too has connotations of class and the celebrity-driven culture of aspirational wellness. A button has two sides!

Norton’s badges remind us how big a small idea can be; these tokens are a vocabulary. He also points out that sometimes fantasy can collide with fact, and reality can be stranger than science fiction. Look at the story of the ‘Cargo Cults’ of the Pacific. The moniker dates back to 1945 and was used to describe Indigenous groups that developed religious beliefs from the trauma of colonialism – sometimes resulting in the worship of Western paraphernalia or machinery (or, for the Yaohnanen people in Vanuatu, Prince Phillip himself). Seen in texts, films, comics and fairy tales, this high-low power plot orbits culture often. Another dot on the apocalypse bingo card?! Says Norton, “Well, if aliens were to arrive here, we would surely be the primitive race.” At this point, it’s not such a radical idea.